Weekly Preview: How Stressed Will the Markets Be?

Friday was a see-saw day in the US equity markets.

After a gap-up open, most indices under- cut their lows from Thursday’s in the morning session, before bouncing up. They spent most of the day in range-bound trading till a last minute push lifted the SPX above the critical 875

level. Given the gyrations during the day I do not put too much emphasis on the last minute surge above 875.

What did catch my attention was a shift in focus from financials, home builders and real-estate related stocks to energy, commodity, materials and industrials. This sector-rotation has characterized the consolidation phases of this rally before and is not necessarily a sign of weakness, especially when viewed against the backdrop of the stress test results for the nation’s largest banks.

The Real Economy vs. the Financials

This weekend, I wanted to take a step back to review some of the fundamental economic and earnings related information which has been overshadowed by the price action in the equity indices.

Over the past few quarters the focus of the media has primarily been on the survivability of the nation’s largest banks. While the banks have grabbed the headlines, most US corporations have dealt with the recession surprisingly well.

The tech boom of the late 90s left many US corporations with significant overinvestment, contributing to

the recession after the bubble burst. Since then US corporations, especially technology companies have worked hard to trim their excess and operate in a manner which gives them great flexibility to react to changing economic situations.

Part of the change, is the focus on core-competency with many support tasks being outsourced (not to be confused with off-shored) to specialized service providers. Investments in productivity enhancement technologies have allowed corporations to shed workers quickly, without significantly undermining their operational capability. All these changes have contributed to an earning season which was significantly better than expected. Part of the reason may have been increasingly pessimistic estimates by analysts caught up in the gloom and doom talk.

A report published by the Bespoke Investment Group showed that unlike what was feared coming into the earnings season, 62.5% of companies (in the S&P500) have beaten their estimates this quarter. They also noted that the difference between companies raising guidance and companies lowering guidance has gone up to -1.8%, up from -11.5% and -13% seen in the previous two quarters. This is very close to the level seen at a similar point in 2003, after the stock market formed its true bottom of the 2000-2003 bear market.

economic metrics have been coming in at a better than expected rate. This again shows the extreme pessimism which seems to have characterized the collective psyche of various analysts and economists publishing the estimates. 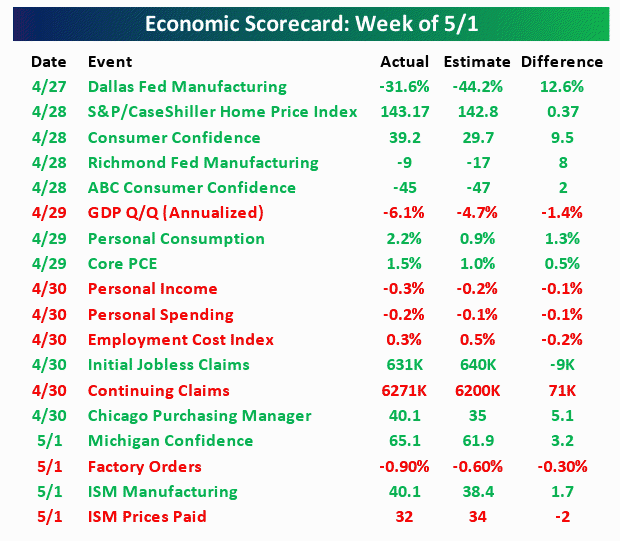 A key indicator of a bottoming in the economy is the Initial Jobless Claims. Though they continue to remain at an elevated level above 600K, over the past few weeks, the number has stopped growing and has reached a plateau, raising hopes that the worst may be over. The green-shoots are clearly visible. The question is will they last.

The one major economic event th is week

is going to be stress test results.

I personally believe that the market is becoming increasingly less correlated with the financials and the future of the equity holders of banks. Many government officials, even senior statesmen like former Chairman Volker, have stated that it is highly unlikely that a major US bank will fail. In my views it implies the following:

banks will honor their obligations.

This is being reflected in st able LIBOR r

ates and a tighter TED spreads.

(iii) The franchise value of the banks will not be destroyed. There is absolutely no value in closing banks which have established relationships with hundreds of thousands of businesses not only in the US but all over the world. Any action that is going to damage those customer relationships will have a deep impact on functioning of the global economy.

(iv) The capital structure will be reworked as needed. This means that the equity holders of some banks will get increasingly diluted and in many cases preferred shareholders too will have to accept equity.

As indicated by the treasury, some banks will have to turn to the government to raise more capital. But there is a backstop in place.

Based on all the above, I feel that the risk of destabilization due to a dysfunctional financial system is likely to be perceived at a lower level.

Given the steepness of the yield curve, the banks have a lot of incentive to lend to credit worthy borrowers. The fact that the Federal government will have a large equity stake in many of these banks means that the pressure on them to lend will be high, and the availability of credit is likely to loosen going forward.

The Risk to the Green Shoots

However, there continues to be a significant risk to the growth of the green shoots. One aspect which I have highlighted in earlier columns is the rise in the long term interest rates. During the six weeks after the Fed’s Quantitative Easing announcement, the yield on the 10 year bond has gone up by close to 70 bps.

This is primarily a result of increased risk appetite as most investors feel that the worse is over. However, higher yields will translate to higher mortgage rates sooner or later. This is likely to derail the Fed’s efforts to recapitalize the balance sheets of US home-owners by enabling lower rate refinancing and supporting the housing market by aiding the first time home buyers.

Many market participants believe that the huge amount of debt the treasury will have to issue to finance the stimulus package and the bank bailout is going to result in much higher yields going forward. They are front-running the economic recovery by selling short longer term treasuries.

There is a clear risk of the yields overshooting to the upside and undermining the economic recovery.

I expect the market to continue to be choppy this week prior to the release of the stress test results. It is likely that the market will ignore the results to a large extent after they are released. However, unlike sell the news, this might be a buy the news event.

There is a lot of money sitting on the side-lines, trying to get in to the market. This money sat on the sidelines during the period of extreme pessimism and missed the rally. The better than expected economic news has proven that the bulls were correct; and it is making the sideline money anxious for a correction.

However, the longer the market stays in its current trading range, the less likely a correction becomes. We are already seeing sector rotation which is resulting in corrections in individual segments. But taken collectively the market has refused to dip more than 5% in any period of this rally.

I will be very surprised if the stress test results reveal any doomsday kind of scenario. If the market does correct, I will start adding to my long positions, since there is a strong underlying bid in the market which is likely to continue till there is an event which can shake the confidence in the growth of the green-shoots. I do believe that we have not seen the end of market shaking events of this bear market, and the green-shoots may turn out to be too fragile to thrive.

Disclosure: The author trades the US Financial Markets actively and holds long and short position in Equities and Bonds