Crude Oil rallied to a new intra-day high of $126.98 today, before pulling back to close the session close to $126/barrel. The trigger for the rally was a International Energy Agency report that the stockpiles of distillates in Europe were down 6.7% in March over the same time year ago. Last week’s EIA’s report had shown a similar reduction in US distillates stockpiles, with a 2.6% year to year decline. Heating oil, a proxy for distillates, rallied to a new high, with the June contract closing at $3.6989; heating oil prices have doubled over the past year and are up 40% year to date.

All the News is Bullish
It is clear that the market has an incredibly bullish tone after Goldman Sachs’ call for a super-spike which could take oil to as high as $200/barrel in the next 6-24 months. The market is focusing only on the good news and ignoring anything bearish.

Today’s rally came in spite of news that IEA had again cuts its forecast for demand for crude-oil (to 1.03 million bpd); the current estimates for growth of oil demand are more than 50% less than the forecast put out in July, 2007 (2.2 million bpd). The IEA expects a further reduction in the forecast as high crude prices, and a slowdown in the developed economies are likely to cut demand further. There is even talk of reduced demand projections in the non-OECD oil importing countries (emerging economies), since the cost of subsidies is sky-rocketing and can no longer be sustained by their respective governments.

Even in oil exporting countries, where gas often sells for less than a $1/gallon, the government is bearing the cost of lost export revenues at prices which are almost an order of magnitude higher. Iran, OPEC’s second largest oil producer, imports 40% of its gasoline.

Iran & Venezuela: Flag Bearers of the $200 Oil
Another factor contributing to the rally was a news report which suggested that Iran was seeking a cut in its crude oil output. This news of impending cuts was later refuted, though the Iranian spokesman did confirm that some discussions had taken place.

Earlier this month, Iran’s oil minister had made statements that disruption in Nigeria and the weak US dollar meant that crude oil could reach $200. Not the one to be left out, Mr.

Chaves of Venezuela had declared that oil would hit $200 if the US attacked Iran.

Both Iran and Venezuela rely on their oil exports to fund their local economy; a fall in oil revenues can have a drastic effect on their ruler’s ability to continue to rule.

Goldman’s Long Term Projection: $75 in 2012?
Lost in the bullish talk of $200 oil was Goldman’s notes about demand destruction. The same report which predicted the super-spike also said that by 2012 the price of crude oil would fall to $75 normalized. Goldman expects the current euphoria to lead to a spike in crude oil prices, which will spur new supply development and also lead to permanent demand destruction.

OPEC has been using volatility in the oil market as a tool to limit the development of new oil fields.

However, with oil projected to remain close to the $100 mark, a lot of these undeveloped fields will now become financially viable.

Advances in technology also mean that oil sources like oil sands, shale oil and deep-sea oil, which were once considered too risky can now be harvested at a competitive cost.

In this article I shed some light on how high oil prices are resulting in a dramatic change in the energy industry and politics. High oil prices are accelerating the adoption of alternative energy resources and may signal the emergence of a new kind of peak oil fever: Peak Demand.

Political Rumblings: Congress Acts
The United States Senate today voted to approve a bill which will prevent any new additions to the Strategic Petroleum Reserve until crude-oil falls to $75, and stays below that level for 90 days at a stretch. The bill passed in the senate with a 97-1 margin which puts beyond any presidential veto.

Though the impact of the 70,000 barrels per day which are put into the SPR everyday is going to be minimal, it signals a shift in the political landscape where President Bush’ significant opposition for any interference with the SPR is being steam-rolled. The vote comes at just as President Bush begins a tour of the Middle-East and sends a message to

the oil exporting countries of the region to take his requests to increase supplies seriously.

The vote is significant because it signals a shift in oil politics, and may be a harbinger of a complete overhaul of US energy policy after the Presidential election is over and the Corn Belt vote becomes less important.

Emerging Economies: Subsidies under Scrutiny
In the emerging economies of India and China, the cost of oil subsidies is becoming a significant economic issue. There is a limit to which the governments can subsidize petroleum products and like the developed economies higher fuel prices are likely to result in demand destruction or at least much slower growth than what may be priced in.

In China subsidies given out to oil companies for imported oil were at $45B and accounted for 5% of the government’s total revenue; they were as high as $87B if domestic production was also accounted for. The government of China is reluctant to pass on the increase to keep a lid on inflation. They also want to ensure that the summer Olympics do not suffer from any Energy shortages. But once the show is over, expect the Chinese government to start taking measures to increase the elasticity in the demand of oil by passing

on the price increases.

istillates like diesel and kerosene is subsidized. Though it is unlikely that the subsidies on diesel will disappear, the gasoline and jet-fuel prices are likely to move higher.

New Discoveries and Supplies Coming On Line
A big contributing factor to the current bloom in the oil complex is the fear of peak oil production. There is a lot of talk about the gap between available spare capacity and demand narrowing, with demand likely to exceed supply soon. A lot of these forecasts tend to discount the discovery and harness ing of newer oil fields

in non-traditional regions of the world.

Case Study: Brazil Deep Sea Fields
Amid the oil patch euphoria last week, Brazil’s state-owned Petrobras announced that it will start producing oil from the 8-billion barrel Tupi oil field in 2009, a year ahead of schedule. Brazil which is already a leader in ethanol harvested from sugar-cane (which does not come with the baggage associated with corn based ethanol) now wants to join OPEC!

The news about the production from the Tupi fields was a pleasant surprise since a lot of the peak oil proponents were very skeptical of the massive deep-sea finds off the coast of Brazil. The nearby Carioca oil fields could contain 33 Billion barrel equivalents and could be the world’s third largest oil field.

Case Study: India’s Deccan Traps
India’s state owned Oil and Natural Gas Corporation [ONGC] reported that it has found oil and gas bellow the Deccan Traps. The Deccan Traps, considered to be 65 million years old, consist of marine sediments uplifted during the formation of the Himalayas which were subsequently covered by hard volcanic rock. Most of the world’s oil is found in Mesozoic formations, and geographical surveys have found sub-trappean Mesozoic-Gondwana sediments with a maximum thickness of 3 km (2 miles) in this area.

This is the first time ONGC decided to explore this region which has long been considered to have huge potential but never explored since it lies below layers of deep and hard rock. The research paper about this study is available online. According to the former Indian oil minister, Mani S. Aiyer, this area can have more oil than the Gulf.

Though it is clear that harvesting deep-sea or Deccan Trap oil is going to be a lot more expensive than harvesting oil from the deserts of the Middle-East, at a $100/barrel, these ventures can be commercially viable.

Since most of the oil consumed

in the US goes into transportation, electricity from renewable sources cannot be pumped in directly into the transportation network. Though electric cars are also coming they still have limitation when it comes to range and performance, which limits their utility.

On the other hand ethanol can easily replace gasoline in cars and will require a less drastic change in our lifestyle.

Ethanol: Getting over Corn
Ethanol is widely being touted as a renewable fuel which can replace petroleum when it comes to transportation needs. In the United States ethanol is being produced using corn as the input. Since corn is starch and needs to be converted into sugar before being fermented to alcohol, the cost of producing corn based ethanol is high.

It is estimated that the energy produced by corn-ethanol is just 1.3 times the energy consumed. In contrast sugar base ethanol produces 8 times the energy used to produce it. The use of corn for ethanol has driven up food prices and is being blamed for inflation.

After the election is over, there is expectation of big changes in US ethanol policy. It is likely that the high import-duty on sugar cane based ethanol (54c/gallon) will see its end, making Brazilian sugar-ethanol a viable alternative in the USA.

The following table taken from Wikipedia shows how sugar-cane ethanol is a cost-effective alternative to oil. One important item to note is that Brazil has 23% of the world’s arable land and at least 40% of that land is not being used and this is without any rain-forests

being destroyed. Sugar cane is one of the most efficient crops when it comes to capturing solar energy and can be grown in a large part of Brazil and other semi-tropical regions.

Comparison of key characteristics between
the ethanol industries in the United States and Brazil
Characteristic Brazil
U.S.
Units/comments
Feedstock Sugar cane Maize Main cash crop for ethanol production, the US has less than 2% from other crops.
Total ethanol production (2007) [32]
5,019.2 6,498.6 Million U.S. liquid gallons

Brew your Fuel @ $1/gallon and Run your own Station!
A Silicon Valley start-up, EFuel100, has come with a washer sized fermenting machine which you can use to brew your own ethanol using sugar. With Federal tax breaks and E-Fuel carbon credits, they estimate that you can brew your own ethanol at about a $1/gallon. Their machine can also take discarded alcohol and generate ethanol at 10c/gallon! The machine costs less than $7000 after Federal rebates, and if gas continues to be close to $4.00, can pay for itself over 2300 gallons (or 46,000 miles @2mpg).

The machine comes complete with a 50 ft pipe and a fueling nozzle which allows you to pump as much ethanol as you would like to use.

The company expects users to blend ethanol into regular gas. For those who want to kick the gas habit completely, conversions kits are available which can allow your car to run on 100% ethanol. 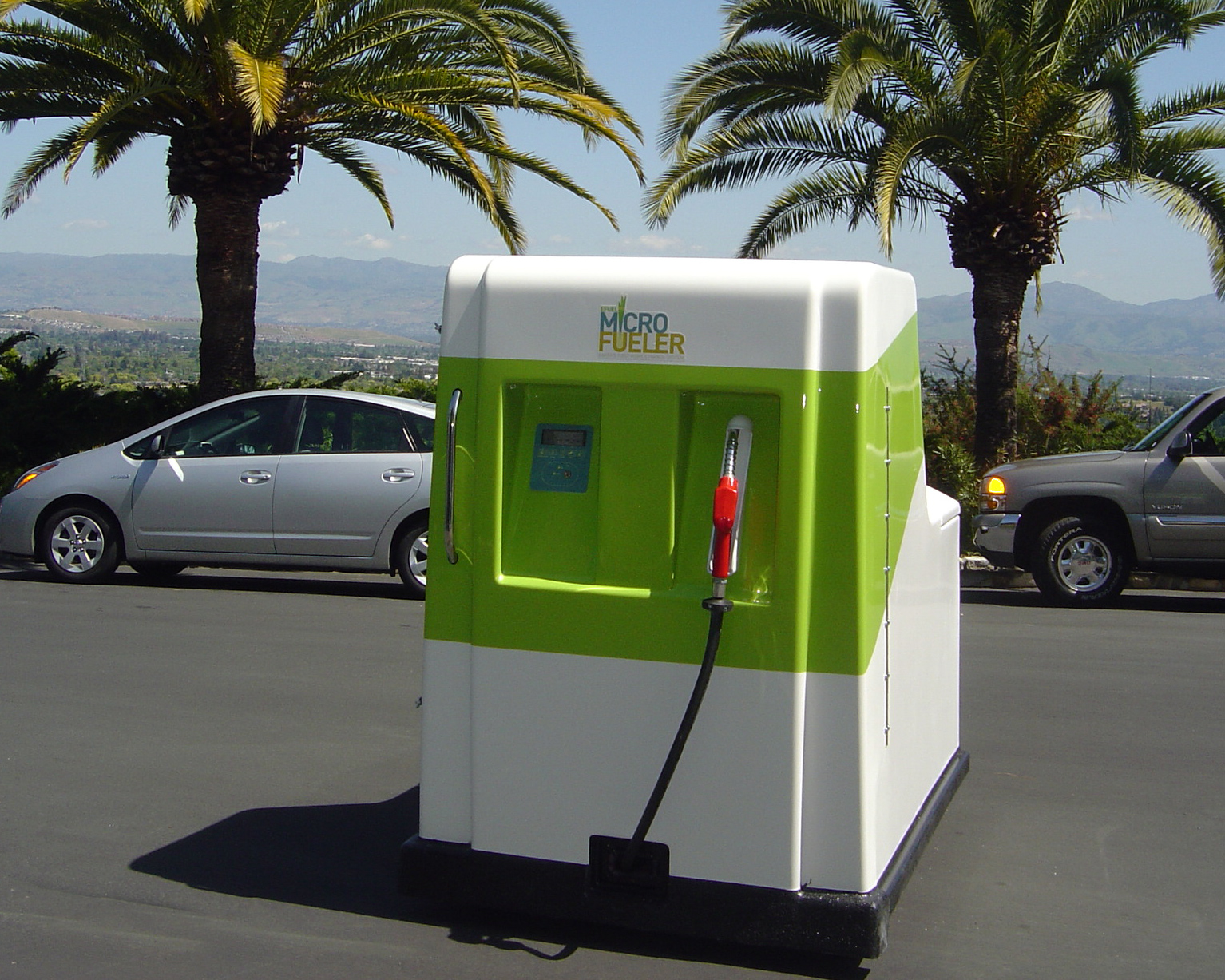 OPEC: Who is in Control?
In the past decades Saudi Arabia was the leading voice in OPEC and helped manage supply and demand. With their immense reserves, the Saudis had the ability to suppress any dissent when it came to supply increases. Over the past decade, the maverick regimes of Iran and Venezuela have become vocal powers within OPEC. These nations’ economies are strongly dependent on oil revenue and short term spikes in oil prices help them strengthen their power. However, this approach is short-sighted. The oil spike is likely to accelerate the development of alternative fuel technologies, energize efforts to develop new fields, and eventually result in a peak in the demand for oil; especially exported oil.

Iran has run out of storage capacity and is hiring tanker ships to store oil off-shore. They cannot find buyers for their crude production at the current price, and the rental rates for oil-tankers is spiking. Perhaps this is a sign of things to come which other OPEC members should pay heed to.